Puryear, who picked up his first win of the 2019 season last Sunday at Carteret County Speedway, moved Alex Fleming to take the lead early in the first 40-lap race.  After that, he survived challenges from Adam Murray on multiple restarts to hold on to the lead and the win – his first win at Southern National since October 2012.

“The last time I won at Southern National in 2012 in a Pro Cup car, so this one is awful sweet,” Puryear told Race22.com in victory lane.  “We’ve been coming to these Thanksgiving Classic races but we don’t usually run during the season here.  It really feels good to come out and get a win tonight.”

Behind Puryear, competitors tried to get the best possible result they could – often racing three-wide and, on one surprisingly successful occasion, four-wide.

“[Fleming] had sparks coming out on the first lap from where they were using the brake so hard,” Puryear said.  “Then Murray tried to run down in the apron here going into turn one.  You know, we had a ball.  I enjoy short track racing and that was a blast.”

Murray went on to finish second while Tim Allensworth, Alex Fleming and Louis White rounded out the top-five.

The second Late Model twin was all about Bradley McCaskill. 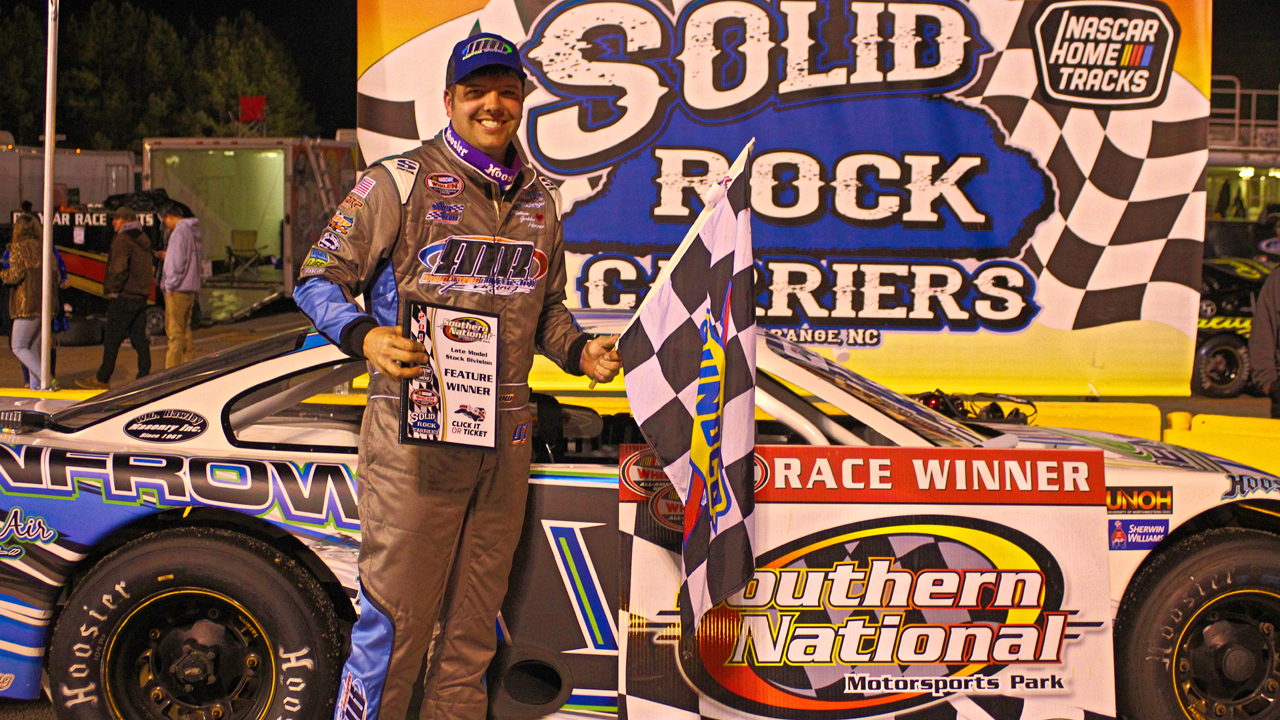 After having to start at the rear, substituting for Ronald Renfrow, McCaskill quickly charged through the field.  McCaskill was able to run down and overtake Boo Boo Dalton for the lead on with just 13 to go and never looked back as he cruised to victory.

“This is our first outing with this car, first race,” McCaskill said.  “We had to work some bugs out of it.  We’ve been playing with it all day.  Made some adjustments after the first race to get a little better.  Victory lane is a good place to be.”

Dalton settled for a second-place finish while Puryear, Rusty Daniels and Alex Fleming rounded out the top-five.

Chase Scott held off a ferocious challenge from teammate Landen Lewis to score the victory in the INEX Legends feature.

Lewis, who is being coached by former NASCAR Gander Outdoors Truck Series champion Ron Hornaday, led the opening lap after getting around pole sitter Eric Courtney.  On the second lap, Scott made a daring pass and prevailed in a four-wide battle for the lead.  Lewis then spent much of the race trying to get around Scott, including a bump-and-run attempt on the race’s final lap, but Scott survived and went on to win.

“I think the old man gave him a little schooling there on the little brake check coming to the checkers,” Scott said.  “I knew it was coming, just kind of waited for it.  We’ll be coming out to Carteret pretty soon to get ready for the INEX Nationals.  This was a good warmup for Nationals.  Good, fast racetrack so get out here and get an early one for Easter.  It was a great race.”

Cameron Murray finished in third while Aaron Crumpler and Ryan Rackley rounded out the top-five.